I didn't know that Lizards have a third eye. It's on the top of their head. It doesn't look like an eye in the traditional sense, but it's an area of skin that contains photoreceptive neurons, and these neurons turn light into signals that cause the Lizard to produce hormones, and some argue enable a Lizard to navigate using the sun with a degree of accuracy, something Salamanders do. And indeed in many of the oldest fossil vertebrates, or creature with spine, there's actually a socket in the skull that may well have held a functional third eye that had a lens and everything.

I mention this because while addressing the Compost Piles I came across a Lizard that was well asleep and I reckoned it was time to make a better effort to identify the correct zoological style title given to this species of Lizard which I have called the Foucault Lizard for getting on maybe fifteen years. The name I gave it had something to do with this particular Lizards general Bolshevik attitude toward just about anything that looked like it was going to turn a Compost Pile. Then when you find out Lizards have third eye you kind of get sidetracked. No idea what the Foucault Lizard's more recognizable name might be.
Posted by Tim Candler at 2:23 PM 1 comment: Links to this post

Very possible the Kitten is an Ingraham-esque bubble dweller. I say this as one who falls very low on the totem pole, down there with the dust bunnies, school children, socks and shoelaces. Surely not! I hear the call. Well imagine yourself settling to sleep, the light is out, the pillow fluffed, the bedding arranged and as the remaining brain cell counts the last desperate Sheep there's a rush from the doorway that bounds onto the bed and proceeds to poke you in the face with a dew drenched and muddy paw.  Even in Holy Week it's an unnecessary and untoward behavior. Nor is there the remotest chance that a virtuous or forgiving reaction from me to this sort of dead of night Attila the Hun antic could ever be rewarded with a chocolate egg. A partially dissected and uncooked vole more likely.

It was Dewi Sant, the diminutive preacher, a forks over knives gentle vegetarian and Saint to the Welsh, who reminded us that it was the little things that count. And by little I don't think he meant the difference in size between an adult Leopard and an adult short haired domestic cat. He was thinking more in terms of being polite to each other, saying please and thank you, hope your foot's better, have a nice day or whatever. That sort of oil that enables a civility so crucial to a cohesive response to impasse. But I guess somewhere in the arena of domestic pets there's an equivalence to Likes on Facebook, and in some fifth dimension in which the Kitten has her second existence there's a You Tube channel with thousands of followers that must be satisfied so the Kitten might hold her ears and tail up high. Have to admit I'd be interested in tuning in to see what else she gets up to.
Posted by Tim Candler at 1:45 PM 1 comment: Links to this post

So what happened to March? Excellent question, and the answer could be complicated. Awash in vague understandings of circles, straight lines, away from Heidegger toward the French Existentialist, who are less daunted by scandal, all this in association with a yearning to become a Scottish Empiricist, that classic stand aside and watch, all of it conjoined with what begins to feel like constant visits to the dentist. Or it could be a simple question of stepping outside and watching the beginning of a spring-time that's no more and no less innocent than all the other spring-times since that fateful collision between earth and what eventually became our moon. Nor does endless rain, wet, chill and flood contribute to balance.

It's kind of no wonder members of our species sometimes retreat into the simple visions, find peace in the bloom of a Dandelion without once thinking about a cloud of Dandelion seeds finding a permanent home in Vegetable Garden paths. And from there look at the Jump Up Plantains, happy as Larks, that briefly inspire then smother the turf. Remember the scourge of Johnson Grass. Stare wistfully at what remains of the Compost Piles. It's a retreat into Hume, the empiricist, that requires a capacity to marvel at the Bees dodging raindrops on the frost scorched Peach Blossom without wondering where the antihistamine pills are.  On the bright side your correspondent has achieved a relationship with lunch. Instead of feeling like the angel of death afterwards, he is able to potter in a vaguely normal manner, which theoretically is nice.
Posted by Tim Candler at 2:08 PM 1 comment: Links to this post

It takes a good four hours to recover from lunch. I'm told you eventually get used to it and over time are perfectly capable of doing something better than fighting off sleep and belching through the afternoon hours. But in a desperate search to remain positive I do remember what I always thought was a totally ridiculous rule which was that you shouldn't go swimming after lunch. I guess now I know why, a person could very easily fall asleep in his water wings and be carried over the Murchison Falls, drown and then be eaten by Crocodile. There'll be debate of course, and yet I'll insist that such a mode of rapture falls into the category of both idyllic and unique, when put beside the more mundane alternatives.

One possibility is the afternoon lie down. A quick nap during which the digestive juices have their chance to get on with it, and then the body awakes refreshed and ready to go. Sadly the occasional afternoon rest experiment, hasn't gone well.  I go out like a light and wake up three hours later feeling like a rabid Wolverine, biting and snarling at anything that moves. Then there's the option of reading quitely. And here I have had some luck, cheered up mightily by the wit of the European Union who responded to the challenge of steel and aluminum import tariffs with the challenge of  import tariffs of their own. Pelosi's California, a tariff on Levi Jeans. Ryan's Wisconsin, a tariff on Harley Davidson, and here at home in McConnell's Kentucky, a tariff on perfectly aged, real bourbon.  Bourbon in Kentucky is an 8.5 billion dollar industry, 17,500 jobs in the state, 800 million dollars in wages, not to mention 300 million dollars in exports and all the additional acres of corn Kentucky farmers are growing for an increasing demand from the distilleries.
Posted by Tim Candler at 1:55 PM No comments: Links to this post

Reckon Forsythia is getting on three weeks ahead, but I could be wrong. Quince a little behind Forsythia. Digging definitely behind last year, further back than that I cannot remember. And if you're interested, whether you love it or hate it a regimen of Free Trade has produced a peace in the world that's far too easy to forget.  As well, easy to forget how easy wars are to start, what a good idea they seem at the time, how certain victory always is, and how incredibly hard wars are to stop.

Oh sure there are little wars all over the place, there's hell and hatred, murder and mayhem, a bunch of wholly headed religious nuts dreaming of the eighth or ninth century, but all the same globalized free and fair trading has done good for a great many of us human beings even if it has caused havoc in the natural world. Frankly you're a mental patient or a geriatric commerce secretary, or someone who can't recover from losing a job they feel entitled to, if you don't see that.
Posted by Tim Candler at 1:39 PM No comments: Links to this post 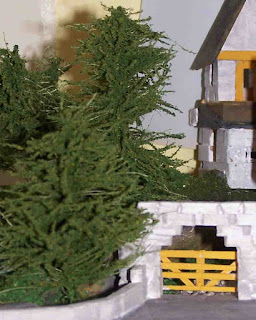 March has something to do with Rabbits behaving oddly. Has to do with the new growth of the grasses, or maybe not. But, some will argue the boy Rabbit has in his search for Spring purpose a good twenty five acres to cover. A lot of running around, and I imagine other boy Rabbits have some say in who goes where and why. It's all about Hobbes, the natural state, it's very much alive and well, and how I yearn to have nothing further to do with any of it which possibly gives me an autocratic leaning, so just as well I'm not the true God or something like a President of a country, or even a hall monitor.

On the brighter side I have found some obedience in the vegetable garden. While still very wet, it's been warm enough for rapid growth in both Winter Wheat and Winter Oats, and this means good deep roots offer leaves a good opportunity at the task of transpiration which has dried the soil enough to make digging possible.  Unfortunately in the course of my ongoing and often affectionate relationship with the long handled shovel we have both chosen to believe that Wheat is by nature a reactionary plant. It basically has Freedom Party Republican written all over it. It's anal, it's retentive, it's matted, it's bad tempered, angry and the list goes on. Winter Wheat on the other hand is just a joy to be around, it's looser leaved, it has an unregimented aspect, generally a great deal freer and rightly the worms seem to prefer it.
Posted by Tim Candler at 1:40 PM 1 comment: Links to this post